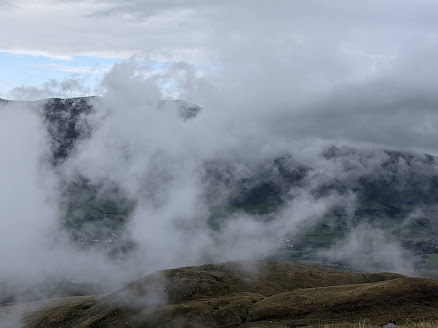 As the coach travelled through the Lakes one or two routes were amended when the poor weather and cloudy became obvious.

At Dunmail Raise the Oldhams were first off the coach. Starting with Seat Sandal and Dolywaggon Pike they aimed to do as many of the Dodds and Cloughs as the weather would allow....

Stuart’s group set off along The Thirlmere west shore path following a slippery path of wet stones through the bracken. Crossing the High and Low Riggs they joined the railway path to Threlkeld.

John G’s group were next off at Wanthwaite.  They ascended Clough Head via Wanthwaite Bank and descended by Mosedale to the Old Coach Road and so to Threlkeld. There were few views till later in the day.

Each of the other groups started heir walks from Threlkeld.

Huw and Steve trailed up to Skiddaw House only to find a frustrated group of DofE youths desperate for a cup of tea at an empty hostel.

Mike and Pat led a large party up past the Blencathra Centre to Gategill and down to Keswick. They returned via Brundholme Road and the railway track.

Thank you to the photographers : Dawn, Mike James, Stuart and Geoff  for the following slide show 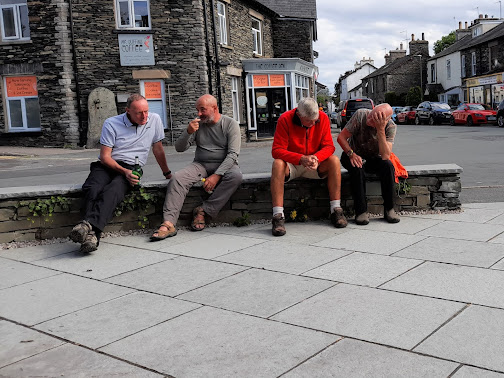 It was good to be back on the Fells again! Although many members have been out walking over the past eighteen months, few had been on the high fells. With that in mind most leaders planned walks that were of a moderate nature and well within our members’ capability. Predictably the Oldham group set off on a 2500’  route to achieve Hollow Moor above Kentmere and return along Sleddale and Potter Fell – an easy 14 miles ? Geoff and Mike took their group up Brunt Knott and returned over Green Quarter and Staveley Head Fell. 12 miles and 2200’. Paul C and his group went north west to Hugill Fell to return over Middle Elfhowe – totalling 11 miles and 1500’. Mike J and Mike B led their groups up a very steep Potter Fell to Potter Tarn and Gurnal Dubbs. Mike J‘s party continued along the Fell Road to Birk Rigg adding a further 300’ to their expedition.                  After watching some brave swimmers in the tarn and not being the least bit tempted, Mike’s group descended to the
Read more 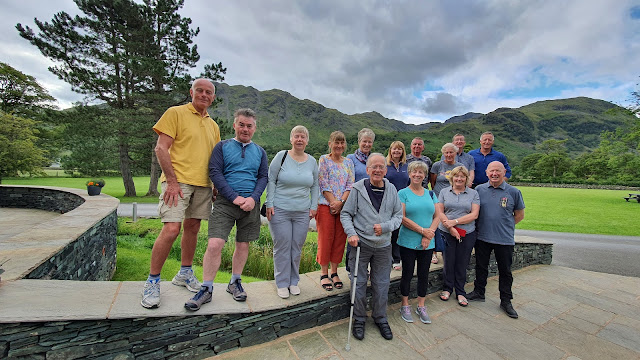 Borrowdale Weekend 31 July to 3 August 2020 Borrowdale Weekend 31 July to 3 August 2020 A group of 14 members was able to take advantage of eased restrictions to get back to some fell walking in the Lake District, this weekend having been deferred from May. Car sharing was somewhat limited so members either met up or did their own thing on the sweltering hot Friday journeying to the hotel accommodation. Glaramara had set out clear one-way systems and dining was split into two rooms instead of the usual one. Food as usual was excellent. Saturday started out less promising, and those who had planned to do Scafell Pike decided to leave it until Sunday, instead driving to Honister Pass to do Fleetwith Pike, down to Gatesgarth and up Robinson and Dale Head, a tough walk with considerable ascent. Other walks included the waterfalls of Langstrath or a walk from Keswick over Walla Crag and High Seat and via Watendlath. Barry decided to add on Dale Head as a little extra at the end of t
Read more